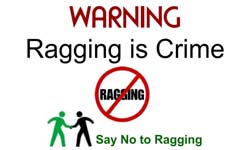 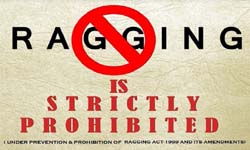 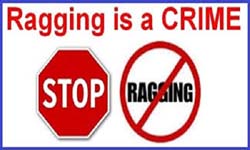 Ragging is not only a form of abuse, a serious act of indiscipline and misconduct but is also considered a “crime” under the Prohibition of Ragging Act and the directives issued by the Hon’ble Supreme Court of India from time to time.

Complaints related to ragging can be lodged with the Police as an FIR and punishment may lead to rustication from R.L. Nursing College, Morena as well as imprisonment. Students are advised in their own interest to abstain from and dissuade others from any Ragging Activities, failing which they will be liable for punishment and penalties as per the law.

The students at the time of registration to the NURSING Program are required to submit an undertaking (on A4 sheet and on a stamp paper of appropriate value, as instructed by AICTE) signed by themselves and their parents/guardians affirming that their ward is liable to punishment/rustication from the institute on the occasion of being found guilty of indulging in ragging activities.

–>Ragging in any form is strictly prohibited within the Institute premises or any other part of Institute Campus and its Hostels.
–>Punishment for ragging includes rustication of a student or students for a specific number of years/cancellation of the result of the examination in which he/she may have appeared.
–> It may be noted that the Institute takes a serious view of any individual/group that indulges in verbal threats, taunts and harassment and physical intimidation, assault, etc. Stern disciplinary action will be taken against anyone found to be doing so and may include expulsion from the Institute.
–> In case of complaints regarding violation or ragging or other rules and regulations, disciplinary action will be taken and may include expulsion from the Institute.
–> Complaints regarding violation of ragging or other disciplinary rules should be brought to the notice of the /discipline Committee including the Director.
–> Ragging for the purpose of these rules, ordinarily means any act, conduct or practice by which dominant power or status of senior students is brought to bear on students freshly enrolled or students who are in way, considered junior or inferior students, includes individual or collective acts or practice which :
* Involve the status, dignity and honor of students
* Violate the status, dignity and honor of students
* Violate the status , dignity and honor of students belonging to the Scheduled Castes and Tribes
* Express students to ridicule and contempt and affect their self-esteem
* Entail verbal abuse and aggression, indecent gestures and obscene behavior
* Any individual or collective act or practice of ragging constitutes gross indiscipline and shall be dealt with under this Ordinance.
* The Director of an Institute, Disciplinary Committee/Anti Ragging squads shall take the immediate action on any information of the occurrence of ragging.

Students are thus warned against any type of ragging activities in the institute campus/hostel and any other place. Those found indulging in any activity which directly or indirectly amounts to ragging shall be penalized appropriately as per AICTE Notification F. No. 37-3/Legal/AICTE/2009 Dated 1.07.09 (available on AICTE web portal: aicte-india.org)

Students in distress owing to ragging related activity can contact any of the following persons: